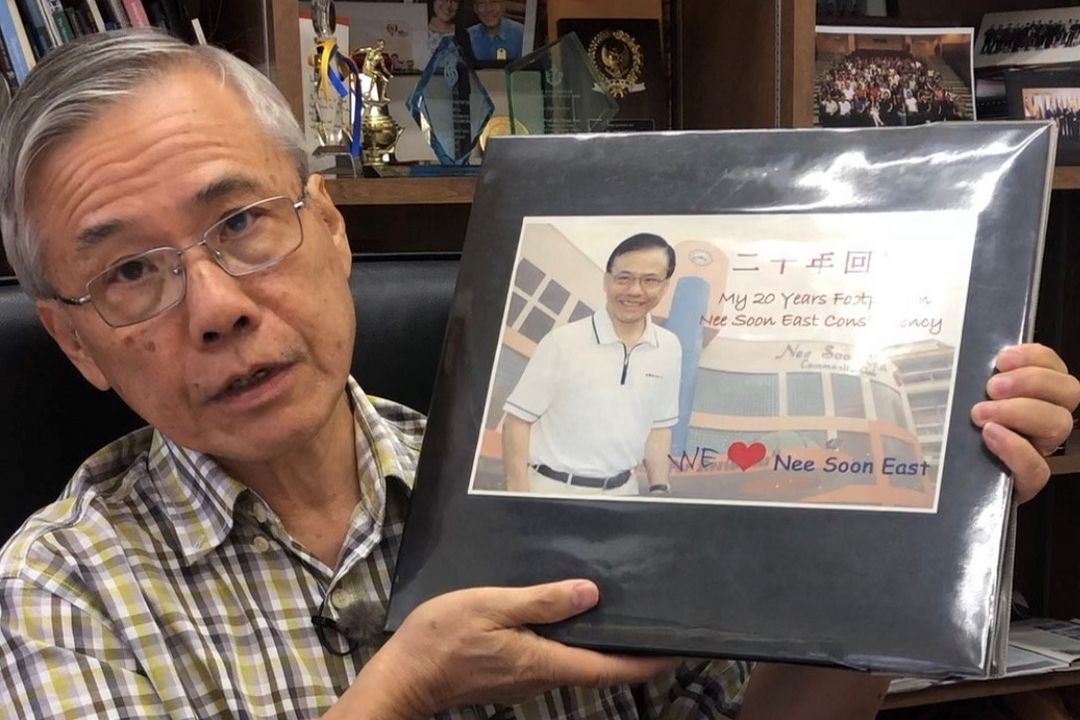 1. Can you share some of the challenges you faced as an MP?
Ho Peng Kee: When I became an MP in 1991, a key challenge was to convince the residents that a professor of law who had no grassroots experience could be an MP, identify with them and make their lives better. This is because they might have certain impressions of you.

To overcome this challenge, the answer was simple – I am just who I am. I wasn’t that kind of professor. I spent many years in university interacting with law students. I was the master and resident fellow of the National University of Singapore’s (NUS) Kent Ridge Hall, living with students. You can say that I am an activist.

Basically, when I went to Nee Soon East, I just did what I enjoyed doing, interacting with the residents, meeting them at events, shaking hands with them, learning phrases to talk to them in their own languages.

We had our own tagline “We love Nee Soon East” in four languages, so you remember it by heart. That was something that rallied everybody together. We even had a Nee Soon song, also in four languages, composed by my classmate who was then the director of the Singapore Armed Forces’ music and drama company.

I brought in my friends who did not have grassroots background but were supportive of what I was doing to help make Nee Soon East better. One of my friends, a professor of transport headed a transport study team to study the problem of traffic congestion in the constituency while another gave talks to the residents.

Another key challenge was reaching out to the residents. In 2001, Nee Soon East was the largest single member constituency in Singapore. When I was a master of Kent Ridge Hall, I learnt the method of organising – working through resident fellows of each block. In constituencies, we have resident committees (RCs). I saw the importance of RCs and I spent my first two years working with and through them to interact with residents.

I was also very fortunate to have grassroots leaders who were young and innovative. We tried many things because the challenge would always be to come up with fresh ideas.

In 2005, during the annual Clean and Green Week, instead of planting trees, the grassroot leaders and I rented bikes and cycled around the whole ward to inspect the trees that we had planted in previous years. At that time, Nee Soon East had the biggest hard court in Singapore and we held our own national day parade in the morning of National Day.

Nee Soon East had many open fields. Being an athlete, I played football with the residents. I probably connected better with those playing with me – they come from all races and ages – as well as people who were watching. When you do that, it is more effective than making a speech. You can make speeches in Parliament but when you go to constituencies, you give serious speeches, they will switch off. So it is about being one of the boys and the interaction isn’t superficial.

I go by four As: Ability, Affinity, Accessibility, and Affirming nature. You must have the ability to help make residents’ lives better, the affinity for people, be able to identify with them; third, you must be accessible to your residents and lastly be affirming.

As an MP, you are a catalyst. You come in with your own experience and background, you bring in professional expertise from outside to work with local leaders to improve the constituency and the livelihoods of residents. You are no doubt the leader, but you are there to make a difference in people’s lives and that was what I tried to do.

2.  What was the memorable moment of your political career?
Ho Peng Kee: The win in 2001 was a significant moment because I fought my first election. I was fielded as a candidate in a SMC in Nee Soon East.

Nee Soon East was a hot seat at that time. I was against Dr Poh Lee Guan from the Workers’ Party. I suppose at that time, Mr Lee Kuan Yew had to come and help me because in every general election, there will be a hot seat. To me, it was a learning process, having fought the election with my grassroot leaders, branch secretary and my activists.

I am thankful that I won quite handsomely – 73.68 per cent. 10 years of hard work on the ground has paid off despite the fierce fight and the rumors.

For an incumbent MP, it is never just about the campaign, it is always about the work that you have done. National policies are important, but ultimately when the constituents vote, they are voting for the person. So what you do in those five years, 10 years, is very important.

Fighting my first election after 10 years, the results showed that I have established rapport with my constituents.

3. What was the most rewarding aspect of being an MP?
Ho Peng Kee: Interacting with residents and working with grassroot leaders to build up the constituency almost from scratch is very fulfilling.

I was very fortunate because I was in the same constituency for 20 years, so I grew up with the constituents.

We saw the place grow in terms of physical facilities. I had the privilege to lead grassroots leaders and others, and with the help of government agencies like Housing & Development Board and LTA to build up the constituency.

More importantly, I had the privilege of interacting with residents over 20 years. Some of them were very young when I first became an MP. Seeing them become young persons in life, and now as Justice of Peace, I married a few of them. That reinforces the sense of family that we have. That has touched my life and hopefully it has touched the lives of my residents.

4. As an MP, who was the most interesting person you have met?
Ho Peng Kee: I went on an official visit to South Africa with the then Prime Minister Goh Chok Tong in 1994 or 1995, just after Nelson Mandala was elected as the president.

South Africans love to dance. During dinner time when music played, we were wondering where our host was. (Chuckles) Out of a sudden, he appeared at the balcony and he was dancing. It was an official visit, but he showed us the South Africans’ way of extending hospitality. It was endearing.

To me, that is what I think Singapore needs to be – that we are different, but we must show our love, our compassion, our hospitality in a Singaporean way.

I have visited many countries and met many heads of state and officials but the trip stuck in my mind.

Nelson Mandala has been through a lot but he said “let’s forgive”. He did not hammer the whites who ruled the country for so many years. He embraced everyone. He was a political leader who showed compassion and love.

5. As PAP celebrates its 65th birthday, what is your wish for the Party?Ho Peng Kee: My wish is for every PAP MP to serve with sincerity, to make the livelihood of their constituents better. It is sincere, consistent service from the heart that will make a difference in the lives of your residents and your constituents.