Engaging with a cause 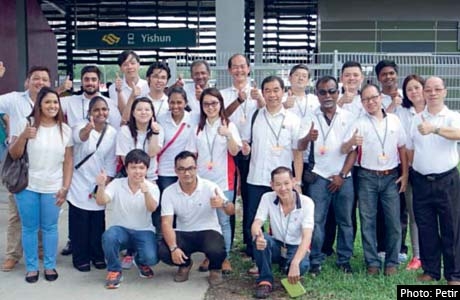 Two meaningful events were organised by Nee Soon Region Young PAP (YP) members recently as part of their community outreach with a cause.

They were Mother’s Day on May 10 and water conservation (water being a scarce resource) in March.

Bright and early on Mother’s Day, which fell on a Sunday, about 40 YP volunteers fanned out in Nee Soon Central, Chong Pang and Nee Soon East constituencies to distribute 3,000 stalks of carnations to residents.

Their cause? To get residents to show appreciation to the “special woman” in their lives. A card accompanying each stalk read: “On a special day, for a special woman”.

“It was sweet to see young children getting the flowers from our volunteers before running back into their mothers’ arms. Husbands were also coming forth to collect them for their wives and thanking them on the spot,” observed Ms Athena Michael, 24, chairwoman of YP at Chong Pang.

Volunteers also handed out the carnations to youths and passers-by so that they could bring them home for their mothers.

Mr Jiang Yulin, 25, chairman of Nee Soon East YP, said: “The event garnered positive attention as all 3,000 flowers were given out within an hour.”

Bringing home the importance of water

Earlier in March, the Nee Soon Region YP held an event to advocate water conservation in conjunction with World Water Day on March 22.

As in the Mother’s Day event, the members spread their message by giving the Newater bottles in public areas such as the wet markets, food centres, entrances of the bus interchange and link ways to Yishun and Khatib MRT stations.

Ms Cynthia Mark, 30, chairman of Nee Soon Region YP, explained the rationale behind the two events: “The mission statement of Nee Soon YP is: Outreach with a cause. We wish to advocate different causes ranging from environment to social causes.”

This article was first published in the May 2015 issue of Petir magazine.