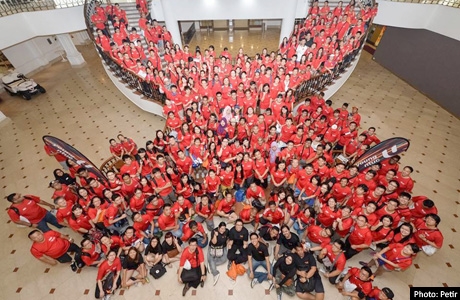 Undeterred by the haze, YP members took part in Young NTUC’s SG50 Amazing Race and in the process, discovered how affordable public transport is in Singapore.

Ever traversed the whole of Singapore with only $7 for transport? Five Young PAP (YP) members did that recently when they took part in the SG50 Amazing Race organised by Young NTUC. The YP team comprised members from the Jurong, Nee Soon and Holland-Bukit Timah YP Regions.

Not only did they accomplish the feat, they also fostered a closer relationship with their counterparts from Young NTUC.

The Amazing Race, on October 3, was held in conjunction with Young NTUC’s 10th anniversary and the nation’s 50th birthday. It attracted some 300 youth union members from 14 unions.

Despite some initial concerns about the haze on race day, it kicked off at 9am with all 60 teams going through a series of checkpoints to complete challenges which could be either physical or a specific task such as solving a quiz or puzzle. And through it all, each team member could travel only by public transport – using a $7-EZ-LINK card.

Mr William Chow, Region Chairman of YP Jurong, Yuhua Branch who took part, said: “It was a challenge. We had to be creative to stretch our dollar. The team pooled together our local knowledge and innovative ideas to achieve an optimisation between our race objectives and our very limited transport budget.

“For instance, we cleared checkpoints that were clustered together to save transport cost, instead of criss-crossing the island in a budget-busting manner. Where feasible, we walked or sometimes even opted to take a slightly longer bus journey to save some money.”

“We learnt many insights into why unions were formed, their history and contributions to the development of Singapore. Most of the answers to the quizzes could not be found on Google!,” said Mr Chow with a chuckle.

“We also did many interesting things together, such as running the length of the Padang to get its length which we managed to accomplish using GPS and taking a ‘jumping-in-the-air’ photo with the Merlion as the backdrop,” he added.

Forging closer ties with Young NTUC was another outcome of the outing. Mr Chow said the two groups already knew each other but the race has enhanced their friendship. “Going forward, YP, which has a pipeline of activities in 2016, will definitely invite Young NTUC to participate in our activities,’’ he said.

This article was first published in the December 2015 issue of Petir Magazine.